why the same crime has such a wide range of punishment? 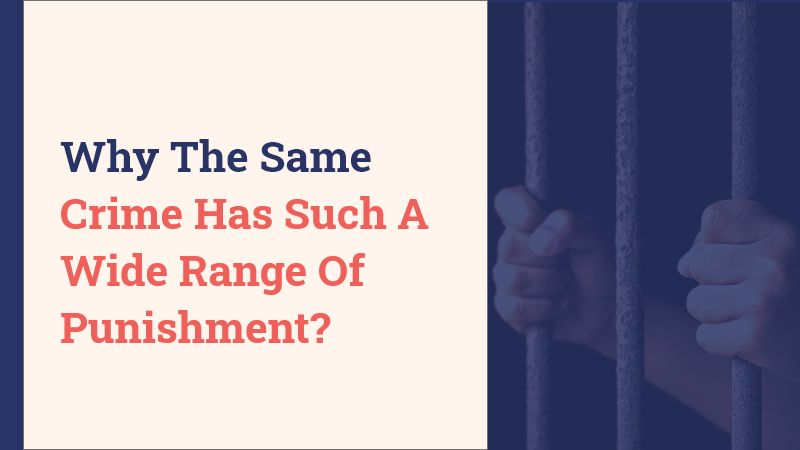 Law usually provides punishment when the crime is confirmed and judges are considered all points of view and background of criminal. punishment must not only be a reaction against the crime itself but must also aim at preventing the offender from committing further crime. Punishment is a type of custom that followed our society to control the crime and this custom become the law that followed by everyone in our society to prevent doings and maintain peaceful and healthy surroundings .so today’s definition of crime is when ” a person wrongful action which constituted a punishable offense “.so what is a punishable offense? When a person’s wrongdoings like murder, theft, child trafficking, and rape and many more called the punishable offense .” to every action, there is a reaction .so there are some theories to justifying wrongdoers who break the social fabric of the society, yet there is no universal applicability of punishment .towards the end of the last century Andrew Von Hirsch writes ‘just desert’ as criminal sanction I.e.the punishment should fit the crime .the principal object of punishment today is the protection of society and the elements of punishment that is justice, Deterrence and reformation are essential. punishment also acts as preventive measures of crime is called ” preventive theory of punishment”.

Nirbhaya rape case: four persons are convicted of rape and murder .the juvenile is given the maximum sentencing of three years imprisonment in reform facility as per juvenile justice act that the bill allows for juveniles 16 years or older to be tried as adults for heinous offenses like rape and murder. Heinous offenses are those which are punishable with imprisonment of seven years or more. The bill mandates setting up Juvenile Justice Boards and Child Welfare Committees in every district. , and remaining were found guilty and someday later were sentenced to death by hanging. So, in this case, they all commit the same crime but the juvenile was sentenced three years imprisonment in a reform facility and other sentenced death penalty.

The intention is a state of mind that must accompany the act of certain crime.it can be classified into three types general intention, specific intention constructive intention. The intention is a very important reason to affect the sentencing of crime .if a person doing an act that results in someone’s death but there is no intention to kill that person and if a person’s motive is only to kill a person.in both condition there is only a difference of intention .then the punishment should be different in each case according to the conduct of each person but with different intentions.

The criminal history of the defendants and the aggravating facts of the case help the judge to decide how long each defendant gets in prison.there is many factors that go into sentencing .it’s all set up on a case by case basis .every offender is different, the fact of every crime is different, even those with the same charge, with the same crime. Even though the charges may be the same, there may be circumstances in each case that would make one worse than the other. There might also be mitigating circumstances in one that would be absent in others.

UNCERTAINTY AND INDETERMINACY IN JUDICIAL DECISIONS

Justice Stewart differs from all forms of crime. Punishment not in degree but in kind it is a unique in its total irrevocability as well as in its rejection of rehabilitation of the convict which is the basic purpose of criminal justice punish of death which is perfectly legal in India .where as many central and state legislation provides the highest punishment without providing how it can be inflicted under section 354 (3) Crpc that provides more emphasis on providing special reasons by the court while emp[osing a death sentence which is constructed by the supreme court to be implied as exceptional reasons the death sentence can be awarded in the “rare of rare “case.

A concept that can be argued to not be an absolute rule for its invariable application.

Yet the same has been profoundly discussed and concretely defined by three judges bench in this case which deploy “balance sheet test” so compare “aggravating” circumstances of the Crime and “mitigating” circumstance of the criminal i.e., to compare the injury or wrong committed and pain or suffering imposed.

While evolving the balance sheet test, Macchi Singh propagated the elements in the death penalty jurisprudence. The go and appalling crime against women, What can constitute rarest of rare crime now society seems to be all normal and nevertheless more stringent laws passed by the legislature has barely ceased to be occurring.

This implies, the solution is visibly is not and can never be “ Hang the murderer and the rapists and we will deter all future crime”.

She capital punishment is irrevocable and it’s the danger is most evident from the judgment of the supreme court as per incuriam and ruled that previsions judgments in which 13 death sentences were validated as per incuriom and passed in ignorance of the law led down in bacchan Singh case.

ROLE OF ADEQUATE PUNISHMENT IN THE SOCIETY

The problem of punishment consists largely of the competing claim of these different approaches .offences are committed by the reasons of a conflict between the interests real or apparent, of the wrongdoer and those of society at large.yet punishment  still not have universal applicability.different punishment doesn’t matter, punishment may also be applied on moral, especially religious, grounds The law usually provides a range of sentences for most crimes (and varies from state to state and the federal system.)The range theoretically allows the court to impose a sentence that is appropriate to the circumstances of the crime— age and criminal record of the offender, the presence of aggravating and mitigating factors that affect how the crime is viewed by society.