THE INSANITY DEFENCE: LOOPHOLE FOR THE CRIMINALS 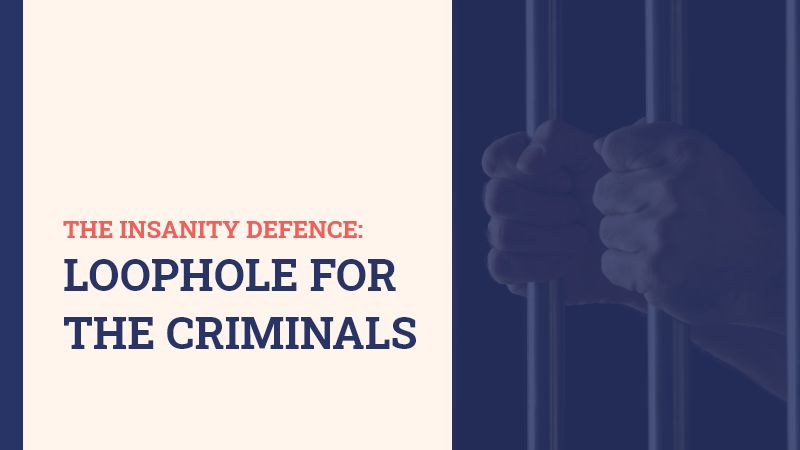 In Our Indian Legal System “Insanity Defence” is a device in criminal law to save an alleged from the accountability of any crime. It is based on the fact that at the time of the crime, the person was suffering from mental illness and therefore, was incapable of understanding what he or she was doing. It is to be noted that this is a legal concept and therefore simply suffering from a mental disorder is not enough to prove insanity. The burden of proof to prove insanity is on the alleged and he/she has to supply the court with sufficient evidence similar to that of “preponderance of the evidence” as in the civil case. This article focuses on the concept of insanity in law and how is becoming the loophole for criminals in modern times.

Insanity defence is a defence wherein a criminal admits the action but asserts an absence of understanding based on mental disorder/illlness. This is why it is more of an excuse rather than a justification of what the wrong he/she has done.

The Section 84 of the Indian Penal Code describes the defence of insanity. Section 84 of IPC, law protects an unsound minded person and provides him/her defence from criminal liability, which is also known as the Law of Insanity. This law is based upon the assumption that whenever an insane person commits a crime in a fit of insanity, he/she does not have an intension and guilty mind to understand what he/she is doing, and that the act is prohibited by the law. For these types of reasons, Insanity law has proven to be of great importance in understanding the mental position of an unsound person and in suitable circumstances grant them exemptions from criminal charges.

Law of insanity defence has been a part of man-made laws since ancient Greece and Rome times. A provision related to Insanity Defence was first observed in a 1581 English legal treatise wherein, if a insane in the time of his lunacy kills someone, they cannot be held accountable for wrong. With many further developments in jurisprudence, the British courts in the 18th Century come up with the “Wild Beast” test by which a defendant was not to be convicted if he/she had an understanding of an infant or a wild beast.[1] This was the first formal method which led the basis for Law of Insanity and with this sign the advent of Insanity Defence.

Following the “Wild Beast Test” and various other tests were also conducted to check if a person is legally insane such as the Insane Delusion test[2], the Good and Bad test wherein it was to be observed that the person who had committed some crime has the ability to distinct between good and evil.[3] These three tests were conducted and they were the early laws relating to Insanity Defence and laid the foundation for the landmark Mc-Naughton Test.

The English Courts in R v. McNaughton[4] devised the McNaughton’s Test which laid the basis of modern-day Insanity Law and is also the basis of Section 84 of the Indian Penal Code. In this particular case, a man named McNaughton killed Edward Drummond mistaking him for some other man. His state of mind was not sane at the time of crime and therefore the court ordered for his acquittal. But the jury considering him insane mind person and therefore brought in a verdict of admitting him in a Mental Asylum. After the judgment in 1843, there was a discussion in the House of Lords and a five-point proposition was made.

1. It is to be presumed that the person is of sane mind until the guilty is proven.

2. The insane person will be liable for a crime if he/she has the knowledge of what he/she is doing at the time of crime.

3. To prove the defence of insanity, the accused by way of his/her insanity should not be in the position to know the nature and consequences of his/her act.

4. The delusions to which the accused is suffering should be real.

5. It is the duty of jury in English law to decide who is insane and who is not.

These propositions became precedent for the law regarding the defence of insanity. The rules emphasized the observation of “understandability” of an accused in a case where he/she has done something wrong. It is a test of determining what is right and wrong.

Defence of Insanity in Indian Law

Provision for Insanity Defence is given under Section 84 of IPC under “Act of person of unsound mind” which states that nothing is an offence which is done by a person who, at the time of commission of crime, because of unsoundness of mind, was not capable of understanding the nature and consequences of the act he/she is doing and also was not aware that the same is prohibited by the law.

It is clear from above section that the provision is much influenced by the McNaughton’s Test, and since it is based upon the 5-point propositions it is divided into two categories, first being Major criteria which cover the cases where the person was suffering from mental illness during the crime and the Second being Minor criteria which cover cases:

1. Accused was not capable of knowing the nature of the act,

2. Person was not capable of knowing that his/her act was wrong,

3.  Person does not have knowledge that what he/she was doing is against the law.

Under both situation, the insanity is legal insanity and therefore once proven the wrongdoer could be acquitted.

Under the provisions of Section 84 of Indian Penal Code legal test of unsoundness has been laid down but nowhere in the provision there is any perfect definition of terms such as “unsoundness of mind” or “insanity” been given, therefore they carry totally different meaning in different contexts and describe varying degrees of mental disorders.[5]  A person with mentally illness is not exempted from criminal liability because there is a difference between legal insanity and medical insanity and courts are concerned only with legal insanity.  To make the distinction between the two, a person suffering from a mental illness is called “medical insanity,” however in the case of “legal insanity” person suffering from mental illness also have losses his/her reasoning power at the time of the commission of the wrong. Legal insanity mainly refers to the mental state of any person at the time of committing the crime and is therefore purely a legal concept and has no psychiatric links in it. For insanity to qualify for legal insanity any one the three essentials of Section 84 as mentioned earlier must be fulfilled and only then the accused can get the defence by way of insanity.

In the case of Bapu Gajraj Singh v. State of Rajasthan[6], the Supreme Court of India held that Mere abnormality of mind or partial delusion, irresistible impulse or compulsive behaviour of a mentally ill have no protection under the provisions of Section 84 of Indian Penal Code.

In the case of Surendra Mishra v. State of Jharkhand[7], Hon’ble Supreme Court held that Section 84 IPC is only for legal insanity and not medical insanity and that’s why a person suffering from mental illness is not exempted from criminal liability.

Therefore, under Section 84 of the Indian Penal Code, it is not only that the person is suffering from mental illness but it is the circumstances based upon evidences that are necessary to prove that the person was also not able to understand the nature of his act and committed a crime.

Under our law, every man is presumed to be sane and is assumed to have a sufficient degree of reason to be responsible for his doings unless the contrary is proved.[8]  By This way Insanity Defence is more like a divergence from the general law and therefore to prove and seek Insanity Defence there are specific provisions prescribed by law. For proving insanity defence, the burden is always on the accused and he has to prove beyond a reasonable doubt that at the time of the commission of crime he/she was “legally” insane. The accused has to prove by placing evidences such as oral and written documentary that would how that he was not capable of knowing the nature of the act or that his/her act was contrary to the law.[9] Hon’ble Supreme Court in the case of  Anandrao Bhosale v. State of Maharashtra[10] , Held that the time when the unsoundness has to be proven is the time when the crime is actually committed and the burden of prove lies on the party which is claiming the benefit of Section 84. In T.N. Lakshmaiah v. State of Karnataka[11], the Apex Court held that the burden on the accused is only to satisfy the preponderance of probabilities which makes it similar to that of civil cases.

1. It is a solution in cases where the person is really having some issues related to mental health, although in present time legitimate cases with such issues are in a minority.

2. Insanity defence prevents capital punishments because an insane person who has although confessed his/her crime is not capable to understand the gravity of what he has done and therefore giving capital punishment to that person is unjustifiable.

3. In our country where an accused of some crime is considered lesser human, the insanity defence provides relief to a mentally ill person. If availed the accused by this can be formally discharged and acquitted.

4. For unsound person, this defence is more like a “life-giver” because his/her state is similar to that of a child who does not know about what is wrong and what is right and is unacquainted with the consequences. Therefore, imposing burdensome charges on unsound person would be against our morality.

1. Considering the today’s world misuse of this defence, the Law of Insanity has been abolished in many countries. Countries such as Germany, Argentina, Thailand and many counties in England have already abolished these kinds of defences.

2. It is next to impossible to fulfill the essentials of Section 84 IPC to show legal insanity. It is the main reason that in many legitimate cases of insanity the accused is charged and punished.

3. There is real threat that this defence can be misused because it is very difficult to prove condition of mind at the time of commission of the crime.

It can be concluded that Insanity Defence has become a loophole for the criminals as it is easiest way to escape from any kind of crime. It is very difficult to prove the mental status of anyone at the time when the crime was committed. The redundancy of our Judicial System is also to be criticized here because it simply adds fuel to the fire which makes this defence lose its value, and all these are matters of word-games. These cases are more difficult than any other cases because here a criminal agrees to the commission of a crime but escapes the consequences and this raises brows of any right-minded person.

For these reasons it could safely be concluded that Insanity Defence has lost its original meaning and has now become a great tool for criminals to bypass legal consequences. Now the remedies available to fight with these lacunas are the formation of more strong laws and committees. The starting step towards reforms could be a mechanism to differentiate between Violent and Insane criminals, in which the former are the real culprits. Reforms here can only be possible when states would make stronger laws to govern such matters and it is the time now for major reforms in these provisions.