DRIVING TO SUICIDE, FROM BULLYING TO PSYCHOLOGICAL TORTURES 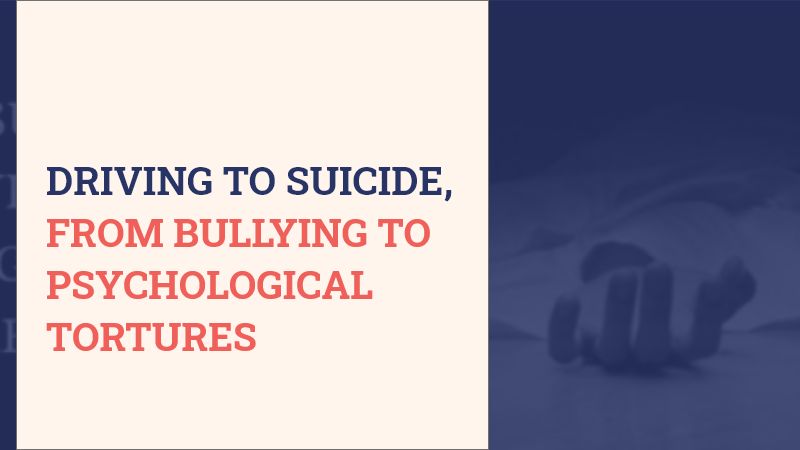 Bullying is the use of aggression, intimidation or threat to violence, to manipulate or to intimidate aggressively. The behaviour is often repeated, and routine. One essential precondition is the perception (by bullying or by others) of a physical or social power imbalance. This imbalance differentiates between bullying and conflict. Bullying is a sub-category of violent conduct distinguished by the following three minimum criteria: (1) hostile motive, (2) power imbalances, and (3) repetition over time. Bullying is the practice of repetitive, offensive actions aimed at harming another person, physically, mentally or emotionally.

Bullying varies from individual one-on-one bullying to group bullying, or mobbing, where the bully could have one or more “lieutenants” ready to support the main bully in their bullying activities. Bullying in school and at work is often referred to as peer abuse. Robert W. Fuller researched bullying, in the form of rankism. The Swedish-Norwegian researcher Dan Olweus says that bullying occurs when a person is “exposed, frequently and over time, to negative actions on the part of one or more other people” and that negative acts occur “when a person intentionally inflicts injury or pain on another person by physical contact, by words, or in a different way.” Individual bullying is generally characterized by a person who in some way tries to gain control of another.

A culture of bullying that grow in any context in which humans interact with each other. These may include school, family, job, home, and community. The largest forum for bullying in mainstream culture is on social media web pages. “The best [bullying] measure was the feeling that the most influential male in a player’s life will help the bullying behaviour” in a 2012 study of male teenage American football players.

In a great many ways bullying can be described. There is no legal definition in the UK of bullying, although some US states have legislation against it. Bullying is divided into four different types of bullying-psychological (sometimes referred to as emotional or relational), mental, physical, and cyber.

Actions used to show this superiority can include physical violence or coercion, verbal assault or threat and these acts can regularly be directed to particular objectives. Such rationalizations of behaviour that include variations in social status, race, faith, sexual preference, gender, acts, body language, disposition, reputation, heritage, weight, height, or ability. If a party is committing violence it’s called mobbing.

The literature corps categorized bullying into different forms. It can be in nonverbal, verbal, or physical conduct. Classification is dependent on the perpetrators or participants involved and the category covers individual and community bullying. Certain examples can include emotional and psychological abuse, in addition to physical harm done to another person or even property. The more recent epidemic of cyberbullying, too, is the case.

Physical, verbal, and emotional bullying are most prevalent in primary school, and can also begin much earlier while continuing into later stages in the individual life.

Specific bullying tactics are committed by one particular person against a goal or goals. Individual bullying can be classified into four categories:

Physical bullying is any abuse that affects another’s body, or damages its property. Stealing, shoving, punching, battling and intentionally harming someone’s property are forms of physical bullying. Physical intimidation is rarely the first form a target will experience of bullying. Bullying can always begin in a different form, and later lead to physical aggression. In physical bullying the main tool that the bully uses are his / her body or any part of it when assaulting his / her target. Many groups of young adult’s bully and alienate a peer because of some adolescent prejudice. It can quickly lead to a situation where they are humiliated, tormented and “bowled up” by their peers. Physical violence often escalates over time, which can lead to a bad outcome, and many are trying to stop it instantly to avoid further escalation.

Verbal abuse is one of the most prevalent forms of bullying. It is any bullying done through speech or other use of speech, and it does not require any physical contact. All of these relates to verbal abuse:

Expression is crucial to physical intimidation of the bully. In certain cases, verbal abuse is common in both sexes but girls are more likely to do so. Girls are usually more prone to threats than boys are. Girls use verbal bullying and social exclusion techniques to bully and exploit other people, and demonstrate their superiority and power.

Cyberbullying entails irritating, threatening, ridiculing or hurting someone else by using technology. Where an adult is involved, it can meet the definition of cyber-harassment or cyber-stalking, a crime that can have legal implications and require prison time. This involves bullying via email, instant messaging, social media blogging (such as Facebook), text messages, and cell phones. Cyberbullying is more common in high school than in elementary school.

Collective bullying techniques are employed by more than one person against a goal or objectives. Collective bullying is known as mobbing, which can include any of the forms involved in bullying. Trolling social media activity is always orchestrated attempts by sponsored astroturfers but is typically assumed to be a individual in nature by the casual reader.

In any context, mobbing refers to an person being harassed by a group, such as a family, peer group, school, workplace, neighbourhood, community or online. It is often referred to as malicious, non-sexual, non-racial / racial, general harassment as emotional bullying occurs in the workplace, such as “ganging up” by co-workers, subordinates or supervisors, driving others out of the workplace through rumour, innuendo, coercion, embarrassment, discredit, and alienation.

Although there is evidence that bullying raises the risk of suicide, bullying alone does not cause any suicide. Depression is one of the main causes that children who are bullied suffer suicide.[58] It is estimated that between 15 and 25 children die by suicide each year in the United Kingdom alone because they are being bullied. Many communities, including Native Americans, Alaskan Natives, Asian Americans, and LGBT people, tend to be at higher risk of suicide. If someone feels betrayed by family or friends, the condition of the victim can get even worse.

In a self-report study conducted in New York by 9th through 12th graders, victims of bullying reported more depressive symptoms and psychological distress than those who did not experience bullying. Just a few years later, for both boys and girls, all types of bullying involvement remain associated with depression. Research that followed up two years after the Finnish teens’ initial survey showed that depression and suicidal ideation among adolescents who are bullied were higher than those who have not reported experiencing bullying. A Dutch longitudinal study of elementary students found that boys who are bully-victims, who play both the roles of a victim and a bully, were more likely to experience depression or extreme suicidal ideation than the other types, victims or bullies alone, while girls with some participation in bullying are more likely to experience depression than others. Participants who self-identified as victims of bullying were more likely to consider suicide in a high school student study conducted in Boston compared to young people who did not report being bullied. The same research also showed a higher risk of suicidal consideration in youth who identified becoming a perpetrator, survivor, or survivor abuser. Victims and victim bullies are related to an increased risk of suicide attempts. It also indicates that the place where teenagers live differentiates their perceptions of bullying and that those living in more urban areas who reported being bullied and harassing others appear to run a higher risk of suicidal ideation and attempted suicide. A national survey given to American 6th to 10th grade students found that victims of cyberbullying experience a higher degree of depression than victims who suffer other forms of bullying. That may be attributed to social media privacy. If an adolescent is depressed and has depressive symptoms, then he should be confronted and interventions adopted. The Danish research showed that children who are bullied spoke to their parents and teachers about it, and some reported a reduction in bullying or a pause in bullying after a teacher or parent interfered. The report stresses the importance of integrating school-based program partnerships to provide resources and anti-intimidation measures in place to effectively prevent and respond when this happens. The study also shows the importance of having parents and teachers discuss their bullying behaviour with the bullies to provide the support needed for those experiencing bullying.

Although avoiding a bully is very easy for some people, it can be very difficult for others to find it and hit a breaking point. There were instances at close quarters of apparent bullying suicides reported by the media. According to voices for education information about suicide, suicide is one of the leading causes of death among young people aged 15 to 24. Less than 16% of students take suicide seriously, 13% have a suggestion and 8% have made a serious attempt.

Intimidation reduction is a collaborative endeavour to deter, minimize, and avoid bullying. There are several programs and activities designed to combat bullying across the globe. Anti-Bullying Day, Anti-Bullying Week, International Pink Day, Global STAND UP to Bullying Day and National Bullying Prevention Month include programs and events to prevent bullying. In 23 of its 50 states, anti-Bullying laws have also been enacted making it illegal to bully in schools.

Bullying is usually a constant phenomenon not a single behaviour. Common ways in which people seek to respond is to try to avoid it, challenge the bullies or turn to an authority figure to try to fix it.

Ignoring it doesn’t stop the abuse, either, and can get worse over time. This may be important to tackle bullying behaviour at an early level, as it may be easier to manage the sooner it is detected. Bystanders play an important role in reacting to bullying, since doing nothing can allow it to continue, while small actions that oppose behaviour can minimize it.

Authority figures may play a significant role in organizational and community settings, such as parents in child or adolescent situations, or managers, human resources workers, or parent organizations. Authority figures may influence the detection and stoppage of bullying activity and the creation of a non-occurring environment. However, under certain situations, people who behave as authority figures are untrained and unqualified, do not know how to respond and may make the situation worse. For some cases, the authority figures often help people do the abuse, promote it and raise the victim’s isolation and marginalization. One of the most effective ways to cope with this is to realize that negative activity is taking place and to create an atmosphere that it does not continue. Individuals that are being harassed have no say over can authority figures they will turn to and how such problems should be treated, and one type of support is to find a counsellor or psychologist that is specialized in bullying.