US-CHINA CONFLICT DUE TO COVID 19 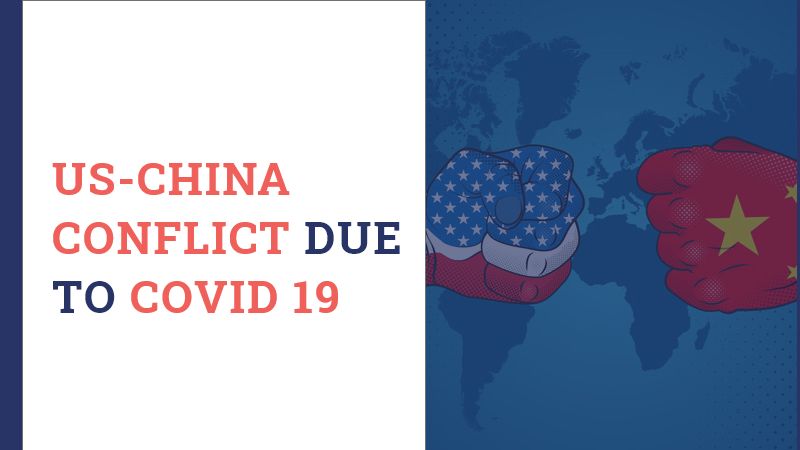 They have so far been important pillars for the global economy. President Donald Trump in 2018 began setting tariffs and other trade barriers on China with the goal of forcing it to make changes to what the U.S. says are “unfair trade practices”. Among those trade practices and their effects are the growing trade deficit, the theft of intellectual property, and the forced transfer of American technology to China.

Not only due to COVID19 But Both US and China has a long history of Trade War. Soon after Mr. Trump came into power, he inclined more toward the Upliftment of share market, Businesses & economy, etc. Due to the Trade deficit, he imposed more & more tariffs on China and promotes the domestic markets of the US.

Recently, in mid-October-November, the Novel Corona Virus emerged from the city Wuhan, China (as the US claimed). Due to late response from China about the virus has put the world in trouble.

What The US has claimed?

Mr. President claimed that the deadly virus is a gift by China which are originated from a Lab located in the Wuhan city of China. He also said that the WHO is mishandling the data of the origination of deadly viruses and also supporting china.

Corona Virus is not the only issue between them but there are many issues that have to be pointed out here in detail. These are some reasons due to which the two superpower country remain tensed:-

In China, there is a perception that America is trying to curb its rise as a global economic power. Mr. Trump’s tariff policy aims to encourage consumers to buy American products by making imported goods more expensive. The US has imposed tariffs on more than $360bn (£268bn) of Chinese goods, and China has retaliated with tariffs on more than $110bn of US products. Washington delivered three rounds of tariffs in 2018, and a fourth one in September last year. The most recent round targeted Chinese imports, from meat to musical instruments, with a 15% duty.

Beijing hitback with tariffs ranging from 5% to 25% on US goods.

The security law will alter the territory’s mini-constitution, or Basic Law, to require its government to enforce measures to be decided later by Chinese leaders. It says the legislation will be aimed at tackling secession, subversion, terrorism, and foreign interference.

This year the Five eyes group which includes (UK, US, Canada, Australia & New Zealand) is aggressively supported Taiwan to return to the WHA. But they failed to do so and this year also China blocks the path of Taiwan to join the WHA.

Recently, the US withdraws itself from the open skies treaty. US Accuses Russia that they misuse the data collected by them. Indirectly, the US tries to point out the china. They claimed that data received by Russia by this treaty is misused and provided to China.

Positive impact:- Let’s see due to these disputes not only India but the entire world is being affected. Whatsoever thing is that, we the middle-class country gets some benefit from this.

For India, a significant shift in the manufacturing sector is awaited and this could be a golden opportunity for India, especially if it is properly positioned. Although, if the tension persists for long, then there could be a slowdown in the economy too. The United Nations had said in a report that India is among few economies that stand to benefit from the trade tensions between the world’s top two economies. Negative Impact:- A Hindi phrase “gehu ke saath ghun pisana” ultimately works here. It means that in the future if India increases the trade relation with China or its ally then ultimately it results in Some Sanctions from the US side (which really became costlier) in the current situation. Some of the negative impact in terms of international perspectives are as:-

Well see, this dispute might not be solved easily and it takes a long time to cover it up. In my view, it seems to be like a new Cold War. Now, the US Restarted the Nuclear test program because they claimed that China has conducted the nuclear test, by violating the Comprehensive NuclearTest Ban Treaty (CTBT) of 1996. If US Indeed does conduct nuclear tests and pulls out of CTBT then it means the world will head towards a new nuclear weapon testing framework where countries like India can get a better status.

India shares a large boundary with China and that’s why India has to take a strategic approach towards the Neighbour countries. Some are as:-