CONDITION OF PRISONERS IN INDIA 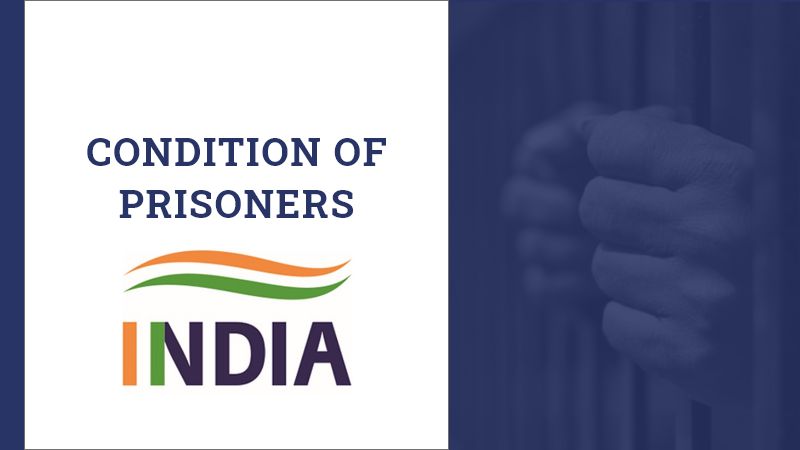 “If you are going to punish a man retributively, you must injure him. If you are to reform, you must improve him. And men are not improved by injuries”     -GEORGE BARNARD SHAW

Every human being has the privilege of born free and equal by nature as also being clothed with  certain basic inalienable rights. Yet society demands that all them who do not conform to the social norms ought to be deprived of these rights by appropriate punishment. Imprisonment is one of the oldest forms of Sanction which is widely practices, in event county.

According to the Oxford dictionary, a prison is, “A place properly arranged and equipped for the reception of persons who by legal process are committed to it for safe custody while awaiting trial or for punishment”.[1]

So primary objectives of Jail was safe custody of prisoners.

Prison management falls solely under the state government, according to the seventh schedule of the Constitution. In each state, the administrative mechanism of the prison depends on the head of the prisons, who is a senior IPS officer. Indian prisons face three long-standing structural constraints: overcrowding, due to a high percentage of sub-trials in the prison population, understaffing and underfunding. The inevitable result is subhuman living conditions, poor hygiene and violent clashes between detainees and prison authorities.

TYPES OF PRISONERS IN INDIA

STATUS OF PRISONERS IN INDIA

The status of prisoners in India is extremely worst. The scenario in Indian Jails is a reflection of crime explosion, judicial motion and mechanical police action coupled with the unscientific negativity and expensive futility of the prison administration.

The main problems facing by Indian prisoners were:

Among the different categories of prisons, the highest overcrowding rate – 128.9% – was found in district prisons.

The majority of detainees have neither financial resources nor outside support to access aid. Legal aid is not readily available because lawyers hired by the state for this purpose are poorly paid.

Convicted prisoners are paid to do work inside the prison, which can be voluntary or part of their sentence. Convicts are paid Rs 12 to Rs 15 per day.

Recently, the Delhi High Court ordered the authorities of Tihar prison to maintain “in abeyance” the practice of deducting 25% of the wages of detainees for a fund created for the welfare of the victims of their crimes or their heirs legal.

Beatings and torture to extract information or confessions are common. Homosexual abuse of prisoners is unchecked.

Prison staff blackmail and guard corruption are common in prisons around the world.

They are faced with poor nutritional intake, poor health and lack of basic sanitation. Hygiene and rape in detention which are generally not reported. There is also the problem of children living in prison simply because their mothers are convicted.

CONSTITUTIONAL PROVISIONS FOR PROTECTING AND SAFEGUARDING RIGHTS OF PRISONERS IN INDIA

The Indian state is also a signatory to the various international instruments of human rights, like the UNIVERSAL DEVELOPMENT OF HUMAN RIGHTS,  INTERNATIONAL CONVENTION ON CIVIL & POLITICAL RIGHTS  AND INTERNATIONAL CONVENTION ON ECONOMIC, SOCIAL & CULTURAL RIGHTS. Therefore, both under national as well as international human rights law, the state is obliged to uphold and ensure observance of basic through its constitution and other laws. The Indian constitution and various Indian laws such as Indian Penal Code, Code of criminal procedure and a host of other parliamentary legislation secures to the  Indian citizens most of the human rights enunciated in the International Convention on civil and political right.

The constitution of India in its preamble seeks to secure to its entire citizen-:   justice, Liberty and fraternity.

On various aspects of prison administration, the Supreme Court Of India has evolved three board principles:

To ensure the implementation of human rights, the Constitution of India does not provide any specific provisions regulating the rights of prisoners but certain fundamental rights have been recognized and applied by the court of law for protecting prisoners right:-Article 14, Article 19 ,Article 20, Article21 and Article 22 of the constitution.

VARIOUS ACTS WHICH ARE PROTECTING RIGHTS OF PRISONERS:

Prison Act of 1894 is the first legislation regarding prison regulation in Indi.

Various provisions under this act are as follows :

This act contains provision authorising the removal of prisoners to a civil or Criminal Court for giving evidences or for answering to the charge of an offence.

Thus, Apart from the substantive prison laws, the Government of India appointed a National Expert Committee On Women Prisoners (1968-87) under the chairmanship of Justice Krishna Iyer to examine the condition of women prisoners.[5]

For the purpose of present re formation and prison justice under this act, falling sections are relevant here to mentions

In 1980, the Government of India set up a committee on jail reform under the chairmanship of justice A.N.MULLA. Basic objective of the committee was to review the laws, rules and regulations keeping in view the overall objective of the protecting the society and the rehabilitation of the offenders. The Mulla committee submitted the report in 1983.

The committee had suggested removing the diarchy of prison administration at union and state level should be removed. The committee specially recommended a total ban on the heinous practise of clubbing together juvenile offenders with the hardened criminals in prison. Consequently, a comprehensive legislation has been enacted for the security and the protection of delinquent juveniles.

In pursuance to the recommendations made by the All India committee on the jail reforms, the Government of India identified Bureau of police research and development ( BPR&D),As a nodal agency at the national level in the field of correctional administration on November 16, 1995 with the specific charter of duties given under:

The following judgement reflects the role of judiciary in protecting and safeguarding the rights of prisoners:-

To ensure good discipline and good administration, an initial classification should be separate males from females, juveniles from adults, convicted of not being convinced detainees, civilians of criminal detainees and occasional prisoners. The main purpose of prison is to prevent crime and reform offenders. And the other main objective was to hire them in order to avoid mental damage and to enable them to contribute to the cost of their maintenance. Under trial prisoners the constitute a majority of prison population than the convicted. Prisoners on trial are presumed to be innocent and most of them are released or acquitted after immeasurable and the mental loss caused to them by the detention due to a delay in the investigation and trial. But the basic dignity of an arrested or convicted person must be respect. The protection of these dignities is mentioned in the Universal Declaration of Human Rights as well as article 21 of the Indian constitution. It is necessary hour that the security arrangements of the prisoners mentioned in prison manuals should be strictly followed and well-equipped and trained prison staff should be appointed to monitor security measures. A regular and timely inspection of bailiffs must be carried out. All police and the administration must combine to ensure effective social reintegration of prisoners.