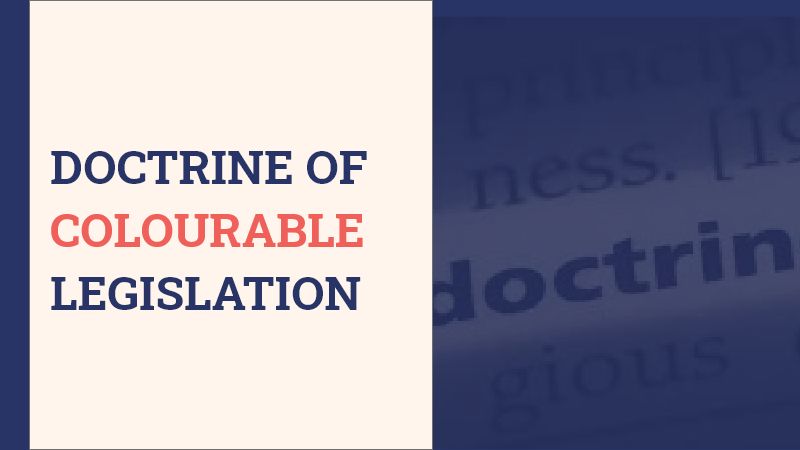 As with every other constitutional law, the Doctrine of Colourable Legislation is an instrument developed and introduced by the Supreme Court of India to interpret various constitutional provisions. It is a guiding principle of immense utility in the construction of legislative powers-related provisions.

Let’s first understand the genesis of Colourable Legislation Doctrine before we know what this doctrine is, and how it is being applied in India.

The Theory of Colourable Law is founded on the founding stones of the Power Separation Theory. Power separation requires a balance of power between the various components of the State, i.e. the Legislature, the Executive and the Judiciary, to be established. The legislature’s primary role is to draft legislation. Whenever the Legislature tries to shift this balance of power towards itself, then it attracts the Doctrine of Colourable Legislation to take care of the legislative responsibilities.

The basic sense of Colourable Legislation is that, under the ‘colour’ or ‘guise’ of the power provided for a particular purpose, the legislature cannot seek to accomplish any other aim, otherwise it is not eligible to legislate on.

In India ‘Doctrine of Colourable Legislation’ implies only a limitation of the law-making power of the legislature. While the legislature purports to act within its authority, it comes to know, but it has actually transgressed those powers. The Doctrine of Colourable Legislation is true as law tries to implicitly do something it cannot do directly.

It’s a matter of how to divide legislative authority between the center and the state, whether it’s based exclusively on the relationships between the two, to create some law or the legitimacy of that rule. The key argument is that the punitive-authorized government cannot dominate the area of competency. It is called “constitutional fraud”.

The whole Philosophy is founded on the principle that “you can’t explicitly do something you can’t do.” Therefore, “Colourable law” is related to ignorance and not tainted by bad faith or malicious intent. A thing is colourful that is what it purports to be in appearance only, and not just in reality.

The Supreme Court of India has laid down some criteria in various court decisions to determine the true essence of the law being questioned as colourful: –

Limitations on the Application of Doctrine of Colourable Legislation

There is also a well-known rule of interpretation which explains why the courts depend heavily on a construction which reduces the statute to futility. The Latin Maxim’s “construction ut res magis valeat quam pereat” means a law or any enacting clause in it must be so constructed that it is effective and operational. The courts prefer building which keeps the statute within the jurisdiction of the legislature.

In K.C. Gajapati Narayana Deo and Ors. v. The State of Orrisa[3], the Supreme Court spelled out the importance and nature of the doctrine of imaginative law. In this case, the Supreme Court stated that “if the Constitution of a State distributes legislative powers among the various bodies which have to function within its domain, marked by specific legislative entries, or if the legislative authority has limitations in the form of fundamental rights, The question arises as to whether or not the legislature has, in a specific situation, transgressed the boundaries of its constitutional authority with respect to the subject-matter of the law or the process of its enactment. Such transgressions may be patent, visible, or direct, but may also be veiled, hidden, and indirect, and in some judicial pronouncements the term “Colourable Legislation” referred to the latter class of cases.”

In State of Bihar v. Maharajadhiraja Sir Kameshwar Singh of Darbhanga[4], is the only case where a statute has been found unconstitutional on Colourable Legislation grounds. The Bihar Land Reforms Act of 1950 was held null and void on the court in this case, though apparently, it claimed to lay down the compensation principle but in reality, it did not lay down any such principle and so indirectly sought to deprive the applicant of any compensation whatsoever.