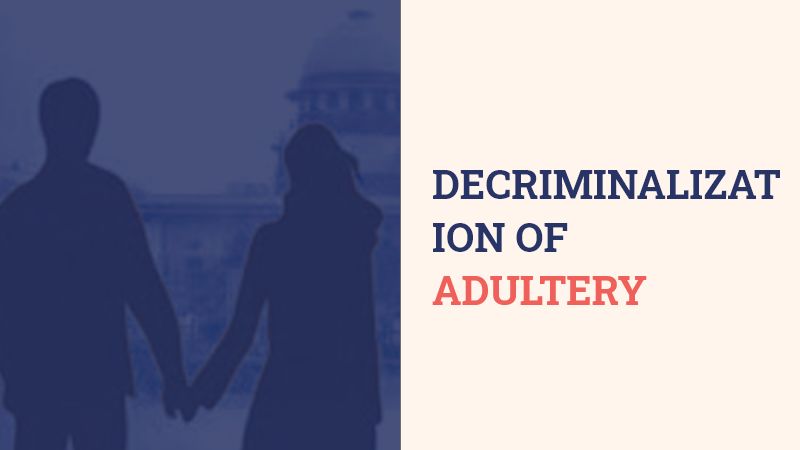 India is a country where adultery is an offence which is considered to be wrong on social, religious, moral and legal grounds. It had a wider application in the history, and this can be said because, it applied only to commission of adultery between a man, either married or unmarried and a married woman, but also between a married man and an unmarried woman. The onus of adultery was consideration of marriage as a sacred institution and punishment for the breach of the same. Historically many cultures have considered adultery as a serious offence, and thus it even incurred severe punishments which were capital punishment, mutilation, torture etc.

The section of IPC says that “whoever has sexual intercourse with the person who is and whom he knows or has reason to believe to be wife of another man, without the consent or convenience of that man, such sexual intercourse not amounting to the offence of rape, is guilty of the offence of adultery and shall be punished with imprisonment of either description for a term which may extend to 5 years, or with fine or with both. In such case the wife shall not be punishable as an abettor.”

The following ingredients essential for this offence: –

Since in an offence of adultery marriage is an ingredient, therefore, the fact of marriage must be established fully. It must be established that the marriage as an event took place and the parties are not simply living together. The particular number of witnesses must be examined to prove the fact of marriage full stop the evidence of the husband and wife that marriage between them took place is not sufficient to prove it according to Rangoon High Court when a man and women lived long together as husband and wife a presumption arises in favour of the marriage which must be rebutted.[1]

Connivance is the willing consent to accountable offence or a culpable acquiescence in the course of conduct reasonably likely to lead to the offence of being committed. According to Allahabad High Court, connivance is a curative expression meaning of voluntarily blindness to some present act or conduct to something going on before the eyes or something which is known to be going on without any protest or desire to disturb or interfere with it.[2]

Under section 497, a wife is not punishable as a better because author of the code was of the view that Indian society is of different kind which may well need a man to pause before he determined to punish infidelity of wives. every act of sexual intercourse amounts to an offence of adultery and if a person has sexual intercourse with a woman several times it cannot be said that offence is continue according to Nagpur high court it is undesirable that there should be successive prosecution complaint by aggrieved person is necessary under this section The court shall take cognizance of offence only upon a complaint made by the husband of the woman when the husband is absent the complaint can be made by the person who has been entrusted with the care of the women with prior permission of the court with the husband is idiot all you natal or is unable due to sickness makes complain it can be made by some other person on his behalf the complaint has to be filed under section 199 CrPC Code 1898 for section 198 (2) CrPC Code 1973.[3]

In Smt. Sowmithri Vishnu vs Union of India[4] it was contended that section 497 is violative of article 14 and 15 of the Constitution on the ground that it makes an irrational classification between men and women in that

But the supreme court rejected these arguments and held that it cannot be said that the defining of offence of adultery so as to restrict the class of offender to men comma any constitutional provision is a friend. It is commonly accepted that it is the man who is producer and not the women. The court further observed that this position may have undergone some changes over the years that women may have started seducing men but it is for the legislature to take note of this transformation and amend section 497 appropriately.

It was further contended that since section 497 does not contain provisions for hearing wife coma therefore it is violative of article 21 that is freedom of personal liberty. In connection with this question the court observed that this section is not violative of article 21 because although this section does not contain provision for hearing of a married woman with whom the accused is allegedly to have committed adultery but if she makes an application in the trial court that she should be given opportunity of being heard she would be given the opportunity, need the substantive 9 adjective criminal law bars the Court from affording a hearing to a party which is likely to be adversely affected by the decision of the court.

Section 497 Is archaic and constitutionally unlawful

Section 497 deprives a woman of self-sufficiency, integrity and privacy. In embracing a notion of marriage that subverts true equality, it increases the violation of her right to life and personal rights. Sexual autonomy is a principle which is an integral party under Article 21 of the Constitution of India and falls within the scope of personal freedom. Respect for sexual autonomy is only created when the partners treat each other with respect and fair care. This section is a rejection of substantive equality in that it promotes the notion that women are inequal partners in a marriage, unable to agree freely to a sexual act in a legal order that considers them to be their spouse’s sexual property. It is violating Article 14 in this way. It is based on gender stereotypes and breaches Article 15 non-discrimination clause. In addition, emphasis on the dimension of connivance or the husband’s approval is tantamount to women’s subordination. It thus explicitly offends Article 21 of the Constitution.[5]

Section 497 To no longer be a criminal offense

A crime is something that is committed on the whole of society, while adultery is more of a personal matter. Dose of adultery does not fit into the concept of crime, as this would otherwise invade a marriage’s extreme sphere of privacy. Yet it still stands as a legal error and a basis for divorce. Everything occurs after committing adultery should be left to the husband and wife to decide, as it is something that can only require their own discretion. Declaring adultery as a crime would therefore somehow establish creeping inequality within the system.

A husband is not the master of his wife

The decision places emphasis on the fact that women can no longer, for that matter, be considered the property of their husbands or fathers. They are of equal standing in society and should have the opportunity to bring forward their stance.[6]

Section 497 was totally arbitrary and manifestly

This is absolutely and manifestly unreasonable and unfair as it gives the husband a license to deal with his wife, as he wants it which is grossly unnecessary and disproportionate. Section 497 of IPC does not require the wife to file any criminal proceedings against the husband.

The Supreme Court has recognized as unconstitutional the 150-year-old law on adultery which treats husband as his wife’s master. India’s then Chief Justice declares, the law of adultery is arbitrary and offends a woman’s dignity.

The Apex Court directly blows down the archaic and patriarchal law in our country in this recent landmark judgment. In modern progressive jurisprudential parameters and expansive constitutional vision, women cannot be seen as property of men.

It also stipulates that if the man consents to develop relationship outside the wedlock then there is no offence. The Apex Court states that the essential aspects of women’s dignity are autonomy, desire, preference and identity.

In this regard, the Apex Court refers the judgment of K.S. Puttaswamy and another v Union of India and others[7] (2017) where the Court declares that the right to privacy is a fundamental right as provided for in Article 21 of the Constitution. The Court has acknowledged women’s conceptual dignity and equality which cannot be curtailed.

Section 198 of the CrPC is also declared unconstitutional along with section 497 of the IPC, thereby decriminalizing the adultery offence. Justice DY Chandrachud claimed that, Section 497’s history reveals that the law on adultery was for the husband’s benefit, for him to secure ownership over his wife’s sexuality. It was intended to prevent the woman from working out her sexual agency.

CONSTITUITIONAL PRESPECTIVE:
India Constitution in its Chapter IV pledges free legal aid should be provided to all and equal justice should be made available to the poor and weaker section of the society.
According to Article 39A of the Constitution of India State shall secure that legal system promotes justice and free legal aid by appropriate legalisation schemes and ensure that justice should not be denied due to economic reasons or other disability. Article 14 and 22(1) states equality before law and legal system should promote justice on a basis of equal opportunity to everyone.
NALSA was constituted under Legal Service Authority Act 1987.
Chronology of NALSA
5TH December 1995 NALSA was constituted.
17th July 1997 A.S Anand headed as Executive Chairman
December 1997 First member secretary joined the committee
January 1998 Other staff member got appointed
February 1998 NALSA started proper functioning for the first time
October 1998 A.S Anand became Chief Justice of India and was headed as Patron-in-Chief

NALSA aims to resolve dispute at pre-legislative stage and if a trail is in court a person to whom legal aid is granted spend nothing during litigation once it is supported by NALSA.
9th November celebrated as National Legal Services Day. It was started by Supreme Court in 1995 with the view to spread legal awareness and promote legal facilities which are available for citizens.