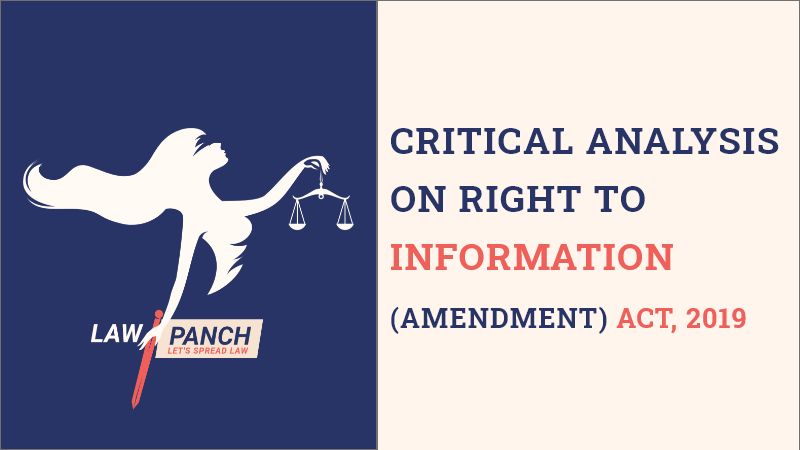 The Right to Information Bill was tabled before the parliament in 2004 as applicable only to the union government and after the protest by civil society against the bill that the information to a common man to be obtained from the state government. So, after 150 amendments the Right to Information Act, 2005 was passed. The main objective of the Act is for the welfare of the citizens, to provide transparency and accountability in the working of government, to provide information and make our democracy work for the people. The Supreme Court in the case Mr Kulwal Vs Jaipur municipal corporation (1986) held that the freedom of speech and expression is obtained under Article 19 of the Indian constitution which implies without the right to information, the freedom of speech and expression will not be fully used by the citizens of India.

The RTI Act, 2005 contains 31 sections, 6 chapters, and 2 schedules dealing with obligations of public authority, powers of central and state information commissioner, etc. In this case, Anjali Bhardwaj & Ors. Versus UOI (2019) the Supreme Court held that the RTI Act is enacted not only to sub-serve but also to ensure freedom of speech. Good governance is an essential part of democratic India and it can be obtained by proper implementation of the Act and it is one of the visions of the constitution. It is also essential for the development of the nation. The major amendment in RTI Act, 2005 is in 2019, where the government introduced Right to Information (Amendment) Bill, 2019 before Lok Sabha proposed that to give powers to the centre to set the salaries and service conditions of central and state information commissioner.

Criticism of the Amendment:

The amendment gave full authority to the centre as everything will be decided by the Central government. So there is a high chance to withhold the information that is against the Central government authorities because they behave like employees of the government. This would violate the right to Information provided under Article 19(1). This amendment made the objective of the RTI Act meaningless. The original Act prescribed the salary and allowances of the officers and now the Central government has to decide the salary and allowances on a case to case basis. The proposed amendment removes the status of the Central Information Commissioner as a Supreme Court judge and this would lower the authority of the officers to issue directions for the senior government officers. The RTI (amendment ) bill, 2019 was passed by 218 members in its favour and 79 members against it, and it passed without public consultation, drafting legislation cannot be left to the representatives alone. The Information Commission can reveal every information to the public only if it has both authority and independence. The amendment will take away the transparency where it is the most important object of the democratic country, now every power will be vested with the Central government and it can unilaterally take decisions which will fundamentally weaken the basic idea and structure of RTI.

Government justifications over the amendment:

The main objective of the Act is to promote transparency, accountability and provide citizens access to Information. But, it is merely damaged by the 2019 amendment. The Information Commission must be independent to provide information for the public to a greater extent but now it is working under the Central government and answerable to the central government for any actions. The government did not provide any credible reason for the amendment and weakened the aim of the law.