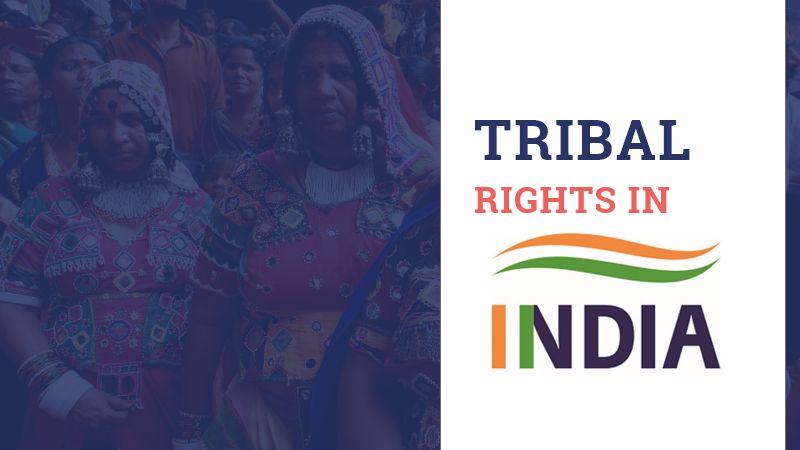 We live in a Welfare State, aren’t we? A Welfare State always keeps the objective of social welfare in its policy and spirit. It aims at providing equal protection to all the communities at large but in India, we see that the tribal community is the most neglected one, not in the policy but in spirit. The Govt. since the independence has made so many policies and programmes and has provided the tribal with several Rights for their upliftment but all that remains on paper and do not produce a substantial outcome. So then, are we truly a welfare State? Tribal population constitute 8.6% of India’s total population and need to be equally taken care of.

The Tribal or Adivasi community represents a social group that generally lives in the areas of high latitude mountains, dense forests, deserts with little vegetation, islands whichever brings them close to nature. These people are highly dependent on land for their livelihood and have a distinct culture, religion, customs, traditions, morals and ethnicity.[1] These people have faced a long and arduous struggle to get their Rights since the colonial rule. The Govt. snatch their lands, their sole means of livelihood for developmental activities. It is pertinent to note that Human welfare cannot be completely ignored in the name of development. Development must balance the ecosystem such that it doesn’t prove adversarial on the life of natives.[2]

The Govt. Needs to effectively implement their fundamental and legal rights in order to sustain their originality & existence. The colonial forest administration was revenue centric and paid no attention to the welfare of tribal community. I understand that, that was the time when situations weren’t in our control but even after 70 years of independence, how far have we accomplished? Their struggle continuous. The tribal citizens have been practically deprived of many civic facilities and are isolated from the modern and civilized way of living since so many decades.

These days, tribal rights are in news because recently S.C. gave an important judgement asking the states to free tracts of forest land in possession of people whose claims have been rejected under the Forest Rights Act, 2006. This has aggravated protests among them. This article portrays various tribal rights safeguarded under Indian constitution and legislative frameworks and also suggests some measures to effectively enforce these rights.

The Struggle of tribal and marginalized group started in colonial time. The colonial forest administration was revenue-centric and exploitative, and thus recognized no rights and concessions for forest dwelling people.[3]

In the early decades of independence, India faced several challenges such as wars with Pakistan and China, which made India realize that, India is not as developed as required. Thereafter, several changes were made in the Indian foreign policy at both national and international level which included establishment of several Dams to fulfill energy requirement, and establishment of heavy industries to create jobs in the markets abroad, and conversion of forests into wildlife sanctuaries. These developments directly or indirectly affected the tribal groups as it started on the tribal land which resulted in huge displacement of tribal population from their ancestral land.

After Independence, among the tribes, activist working for tribal & experts expected that, the free government of India would recognize the tribal rights over forests and get rid of the exploitation, which was earlier practiced in the name of ‘forest administration’. But the Government of India disappointed tribes by adopting the same old British laws and principles which recognized no rights of tribal people over traditional land, forest and river. The Indian Forest Act of 1927 authorized the Govt. to appropriate any property which does not have legal documents or legal ownership. This practice persisted for much later until the enactment of the Scheduled Tribes and Other Traditional Forest Dwellers (Recognition of Forest Rights) Act, 2006 which recognized their Right to use, manage and govern forests for their livelihood as well as for the protection of forests.

Our Constitutional framers have incorporated several constitutional provisions to improve the socio-economic condition of STs & to promote and protect their culture, traditions and customs.

This Chart illustrates a no. of constitutional safeguards given to the Tribal people. Art. 366(25)

refers to ‘Scheduled Tribes’ as those communities who are scheduled in accordance with Art. 342[4] of the Constitution. The Constitutional framers were well aware of the need of social upliftment of the backward classes including Scheduled Castes and Scheduled Tribes and that’s why we find several fundamental and constitutional rights concerning them which can be divided into following categories-

The Supreme Court in Indra Sawhney v. UOI [6], upheld the Mandal Commission’s 25% quota for backward classes. The majority also held that the reservation in appointments under 16(4) are confined to initial appointments only. There shall be no reservation in promotion. However, after this judgment, clause (4A) was added in Art. 16(4) by way of 77th amendment, 1995 providing reservation in matters of promotion as well.

Furthermore, Art. 19(5) imposes reasonable restrictions on the fundamental Right to move freely and to reside and settle in any part of territory of India, in the interest of general public or for protection of interests of any Scheduled Tribe. Further, Art. 29 protects the interest of minorities. It tends to promote their cultural and educational rights, so that S.T communities can preserve their languages, dialects, cultures etc.  Art. 350, 350A and 350B works on the same footing to conserve their distinct Language, Script or Culture. Moreover, Art. 46 imposes an obligation on the state to promote, with special care, the educational and economic interests of the weaker sections of the people, and in particular, of the Scheduled Castes, and the Scheduled Tribes, and to protect them from social injustice and all forms of exploitation.

The Social Safeguards to tribal people include, Prohibition of traffic in human beings and beggar and other similar form of forced labour (Art. 23) and prohibition of Child Labour under Art. 24. Our Constitution provides for the Economic safeguards as well. Art. 244 provides special provisions in administration of Schedule Areas, Scheduled Tribes and Tribal Areas. These provisions are also mentioned in the Fifth and Sixth Schedule of the Indian Constitution. Art. 275 provides for Grants-in-Aid from Union to specified States (STs & SAs). The Political Rights inculcate Reservation of seats for STs in Lok Sabha (Art. 330), State Legislatures (Art. 332), Panchayats (Art. 243D) and in Municipality (Art. 243T). Art. 164 provides for the appointment of Minister of Tribal Welfare in the States of Bihar, M.P. and Odisha. Besides this, we have a National Commission for Scheduled Tribes constituted under Art. 338 A for monitoring these safeguards.

The Govt. has so far enacted several Acts for providing protection to the tribal community. This section discusses the Rights of tribal people under some of these enactments. The Ministry of Tribal Affairs looks after the tribal welfare and implementation of these Rights.

The Scheduled Tribes and Other Traditional Forest Dwellers (Recognition of Forest Rights) Act, 2006, was enacted to protect the marginalized socio-economic class of citizens and to balance the right to environment with their right to life and livelihood.

The Act empowers the communities to use, manage and govern forests for their livelihood as well as for the conservation and protection of forests. The law provides for recognition and vesting of forest rights to Scheduled Tribes in occupation of forest land [7] prior to 13 December 2005 and to other traditional forest dwellers who are in occupation of forest land for at least three generations, i.e. 75 years, up to a maximum of 4 hectares. These rights are heritable but not alienable or transferable. The Act recognizes the rights over “community forest resource” that it defines as customary common forest land within the traditional or customary boundaries of the village including protected areas. Sec 3 of the Act, confers a no. of Rights on tribal People. Some are as under-

The Panchayats Extension to Scheduled Areas Act (PESA), 1996 was enacted subsequent to the 73rd Constitutional Amendment. Based on the recommendations of the Bhuria Committee[8], Parliament passed this separate legislation in 1996. It decentralized existing approaches to forest governance by bringing the Gram Sabha center stage and recognized the traditional tribal rights over “community resources” meaning land, water, and forests. This significant legislation was expected to have far reaching consequences in the social, economic, and cultural life of tribal people in Scheduled Areas. All the scheduled states were given one year to amend their respective Panchayat Acts to conform to the letter and spirit of PESA. Unfortunately, a handful has ventured into adhering to the PESA provisions as regards tribal law making.

The Act was enacted to prevent the commission of offences of atrocities against the members of SC & ST. It penalizes such offences and provides for Special Courts for the trial of such offences and for the relief and rehabilitation of victims thereof. The State Govt. is under the obligation to effectively implement the provisions of this Act.

Dr. B.R. Ambedkar, himself being the one, could clearly see the future of tribal and marginalized groups in India. His broad vision towards their upliftment is portrayed in the Constitution. Unfortunately, we couldnt live up to his dream even after so many decades. The tribals have been constantly struggling to get back their rights which were taken during the colonial administration. Now, it’s high time to end their long and arduous struggle. Though the Govt. has put in many legal frameworks for their protection but without implementation, they remain of no value. Therefore, the Central & State Govts. must come up and collaborate towards implementing FRA, 2006 and other legal frameworks in its right spirit. Other measures include, ensuring regular meetings of district and sub-divisional committees to leverage modern technology to map and monitor the implementation of FRA. Besides this, the Forest bureaucracy must be reformed to serve as service providers to Gram Sabhas and also the Ministry of Tribal Affairs at Centre and State levels needs to strengthen itself with human & financial resources to implement the tribal rights. Following these steps will not only lead to development of forest dwellers, but also build a relationship of trust between them and Govt.