LEGAL STATUS OF RIVERS IN INDIA 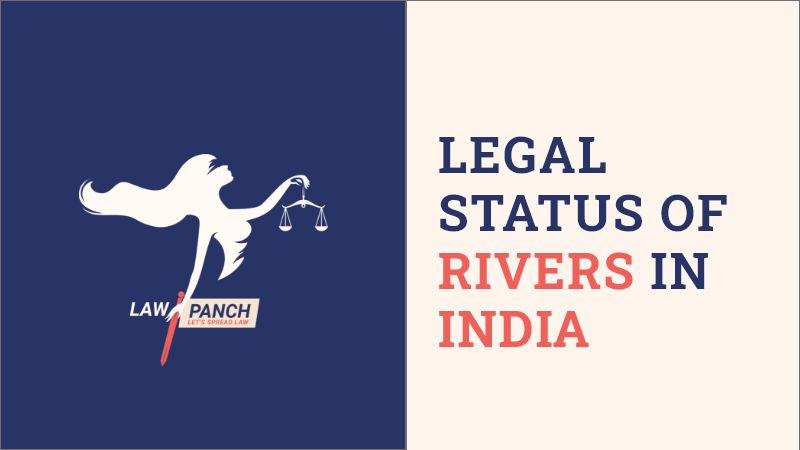 Water is vital for all known living species in the earth. There are many sources of water in the earth they are surface water, ground water and rain water. Among this the surface water plays a key role and lakes or rivers constitute this surface water. As pure water is essential for sustaining it is the duty of the human beings to protect and save the water and its sources. In India the water pollution is in serious condition, as almost 70 percent of its surface water and its sources are contaminated by biological, organic or inorganic, toxic and chemical components[1]. There are many laws existing which are passed by the legislation for the protection of water resources and to control pollution over it. But is there any legal status awarded for the rivers? In this essay we can look upon the legal status of rivers in India.

Professor Christopher D. Stone was the first one who in his article “Should Trees Have Standing? – Towards Legal Rights for Natural Objects”[2], where he suggested that legal rights should be given to natural objects and may be represented in the court by legal guardians. Later in many countries like the Ecuador, Bolivia, New Zeland, India has accepted and established the concept of “Rights of Nature Theory” in law. Also the rights of rivers has been recognized in many countries. Ecuador is the first country to recognize Rights of Nature in its Constitution[3]. The constitutional rights granted to nature in Ecuador have been recognized by the courts in context of rivers also.

The Whanganui River which is the third largest river in New Zealand was declared as legal person hood. Also the New Zealand government granted similar legal personality to Mount Taranaki[4]. Following the trend, in India the Ganges and Yamuna Rivers were given legal status.

LEGAL STATUS OF RIVERS IN INDIA

The Whanganui River is the first river in the world to given legal rights. After the passing of the Te Awa Tupua (Whanganui River Claims Settlement) Act, 2017 the river was recognized as a legal person and is given all the rights, powers, duties, and liabilities as that of a legal person[5]. Shortly after the passing of Te Awa Tupua Act in New Zealand the Uttarakhand High Court in India, legal person hood was given to the rivers Ganges and Yamuna[6]. The story began with Mohd. Salim v. State of Uttarakhand[7], which was a Public Interest Litigation (PIL) filed by Mohammed Salim concerning illegal construction and encroachments along the Ganges River, also the failure to constitute Ganga Management Board, as required by the Uttar Pradesh Recognization Act, 2000.

The Uttarakhand High Court in its decision on December 2016, issued some directions to the government. The court ordered the officials to evict two private parties from the government land, directed the Central government to constitute the Ganga Management Board within 3 months and banned the mining in the river bed and its highest flood plain area. In addition to it this the court had also directed the Central government to reach a settlement as to the sharing of water between the States of Uttar Pradesh and Uttarakhand.

On March 20, 2017 that is several months later the matter come before the High Court and the court expressed its displeasure to the government that no action had been taken to implement the directions given by the court. The court noticed that the encroachers on government land had not been evicted and issued directions for eviction within 7 days. Also the court criticized both the governments of Uttar Pradesh and Uttarakhand for not setting up the Ganga Management Board in accordance with the Central Government.

The court noted that the rivers Ganga and Yamuna are losing their very existence and inorder to preserve and conserve the two rivers an extraordinary measure has to be taken. In this context the court declared the rivers Ganga and Yamuna, as well as all their tributaries, streams, including every natural water body flowing from or with these rivers as living entities. As living entities both the rivers will have all the rights and liabilities as that of a living person. The Director of the NAMAMI Ganga Programme as well as the Chief Secretary and the Advocate General of Uttarakhand and was declared to be the legal parents of the rivers to uphold the health and well-being of the rivers. The court has also explained the spiritual significance of the rivers as both of them are considered as sacred to Hindus and are worshiped by them.

The response to the High Court’s decision was mixed. The Uttarakhand State government argued that the ruling simply was not practical and could lead to complicated legal situations and moved to the Supreme Court. The government argued that the declaration was legally unsustainable. The Supreme Court overruled the previous decision of Uttarakhand High Court and held that India’s Ganges and Yamuna rivers are not living entities[9].

Granting of legal status to river enables the river’s legal guardian to bring an action in the court if the river is damaged, enter into contracts on behalf of the river and own property. The declaration by the Uttarakhand High Court attracted a lot of publicity. The supporters of the legal status of rivers states that it is a major innovation and can bring major changes. While the criticism is that the sudden change can bring lots of legal issues such as if the river gets overflowed and the surroundings get drowned and people got died due to this, will the river will be responsible for murder? In my opinion its a major step but this step should be taken gradually by properly studying every aspects and conducting researches. The Whanganui River in New Zealand was given legal status after 140 years of legal battle. All the natural resources should be protected not only the rivers. Also it is the duty of us to protect it and without natural resources life of human beings are unsustainable.