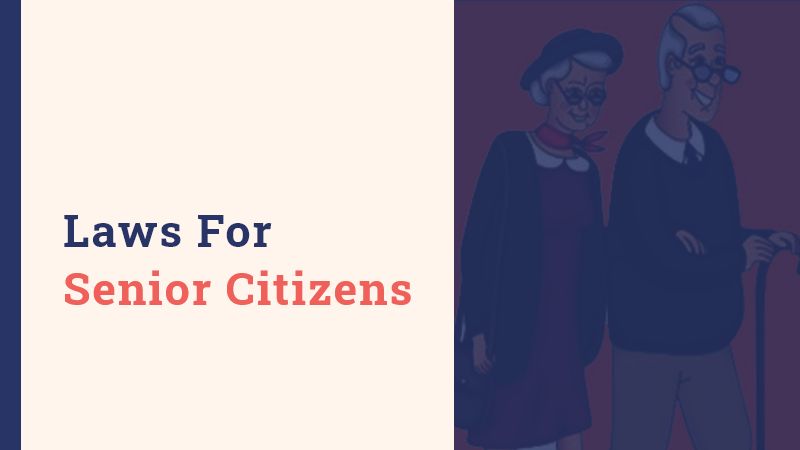 Ageing is a natural phenomena, beyond the control of living beings. Everyone has the right to live with dignity and respect. It is the ageing process that makes a person old and they are not able to perform the functions of life as before in their old age. The old age brings in several challenges which also includes the inability to perform economic functions. In the recent years, there have been several cases of exploitation of senior citizens and subjecting them outside their homes. Since then the government is taking initiatives to formulate laws to protect the rights of the Senior Citizens. It is the foremost duty of the childrens and the legal heirs to support the senior citizens of their families. There have been a legislation passed in this behalf, Maintenance and Welfare of Parents and Senior Citizens Act, 2007. Intergenerational equity is regarded as a part of Natural Justice. Measures are being taken at the International level to safeguard the senior citizens of the World. As the Indian Population is increasing continuously, so is the senior population in the Country.

There are immense number of issues with regard to the life of senior citizens ranging from physical and economic disability. The problems are as mentioned below –

Indian Laws for the Senior Citizens

The Constitution of India is considered the law of the land. This law also enumerates provision with regard to the protection of the senior citizens of the Nation. Mainly, Chapter V of the Constitution which states the Directive principles of State Policy enumerates various provisions that are to be followed by the State while framing laws. It aims at establishing a Social Welfare State in the Country.

Article 41 – As per this Article, The State shall make effective provision for securing the right to work and to public assistance in unemployment for the senior citizens, sickness and disablement. [1]

As per this policy, certain rights were granted to the older persons. Some of them are as follows –

Many a times issues were raised in the U.N regarding the rights of the Senior Citizens. The General Assembly in 1991 adopted the United Nations Principles for Older Persons whereby the assembly appreciated the contribution of the old aged people to the world. The general assembly asked the governments to implement the following principles as enumerated below-

Maintenance and Welfare of Parents and Senior Citizens Act, 2007

As per the Act, senior citizen means an Indian who has attained the age of 60 years or more. And Children includes Son, daughter, grandson, grand daughter, son-in-law, daughter-in-law etc.

Maintenance under the Act

Under this Act, any person who is a senior citizen and is unable to maintain himself through his income or property shall be entitled to get maintenance under the act. It is an obligation for the children to maintain their parents including both father and mother. In case the children are not maintaining their parents or seniors then the parents or the senior concerned may claim maintenance to the tribunal established under the act. In case the parents or the senior is not in the state to file a case then any other person or organisation may file a case to the tribunal on his behalf.

Protection of Property under the Act

Maintenance and Welfare of Parents and Senior Citizens (Amendment) Bill, 2019

This bill was introduced in the Loksabha by the Minister of Social Justice and Empowerment. The bill seeks to amend the Maintenance and Welfare of parents and senior citizens Act, 2007. The major amendments are as follows –