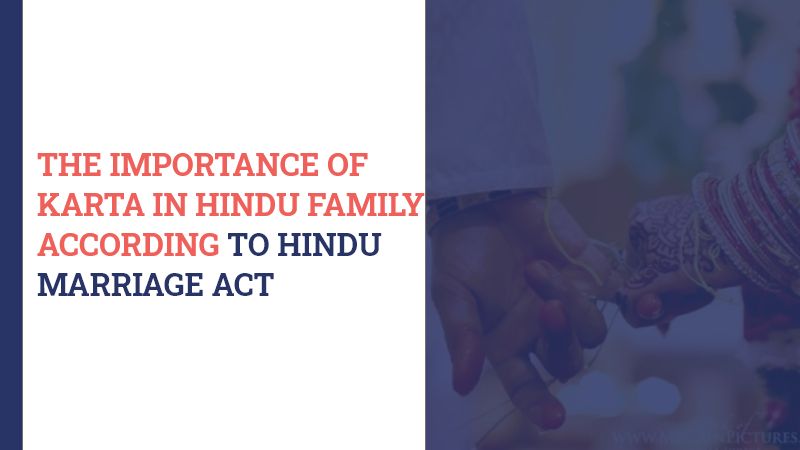 Well, As we know that, In the entire Hindu joint family, the karta or manager, occupies a very important position. He possesses a pivotal position. So unique is his position that there is no office or institution in any other system of the world which can be compared with it. His position is sui generis. He is a person with limited powers, but, within the ambit of his sphere, he possesses such vast powers as are possessed by none else. He is the custodian of the income and assets of Hindu undivided Family.

Even a leper may continue to be the karta.

Female member as karta-  The Nagpur High court held the view that mother, though not a coparcener, can be, in the absence of adult male members, karta of the joint family, and her acts will be binding on others as that of a karta. The supreme court in comm. Of income tax v. seth govind ram, after reviewing the authorities, took the view that the mother or any other female could not be the karta of the joint family and therefore cannot alienate joint family property.

As we know that the eldest member in the family taking all the responsibilities of the family. The position of karta is sui generis. The relationship between him and other members are not that of principal/agent/partners. He is not like a manger of a commercial firm. Needless to say he is the head of the family and acts on behalf of other members, but he is not like a partner, as his powers are almost unlimited. Undoubtedly, he is the master of the grand show of the joint family and manages all its affairs and its business. His power of management is so wide and almost sovereign that any manager of business firm pales into insignificance. The karta stands in a fiduciary relationship with the other members but he is not a trustee.

The Karta may file lawsuits or other legal proceedings to safeguard the interest of the family and its property and affairs  Sheoshankar v. Jaddokunwar, AIR 1914 (41) IA 216.

The most basic duty of a Karta is to provide food, shelter, clothing, etc. to the members of the joint family. His several responsibilities include:

Opening of accounts refers to the inquiry of the assets of the joint family assets.

An inventory is prepared. This includes all items of the family property. The Karta under the Mitakshara Law is required to disclose the accounts only if there are charges of misappropriation, fraud or conversion of assets or property of the joint family against him. In the absence of proof of misappropriation, fraud or conversion against the Karta, the coparcener pursuing the partition cannot demand the disclosure of the past dealings of the Karta with the joint family assets and property. However, if the coparcener who is suing for the partition is wholly excluded from the enjoyment of the property, he can ask to look into the accounts. After severance of status, the Karta must render accounts of the expenditures and income in a manner similar to that in which a trustee or agent has to render accounts. This implies that the Karta has to account for and report all profits.

4. Representation: The Karta is the sole representative of the family vis-a-vis the government as well as all other outsiders. It is because of this position that he must perform several responsibilities and liabilities on account of the family. He must pay taxes and all other dues. He can also be sued on behalf of the family for his dealings.

Karta’s powers in the joint family property are no greater than a coparcener in neither family nor does Karta’s right to enjoy the same as any other coparcener. He receives no remuneration for the services he renders in the family.

Karta has extensive control over the income and expenses of the common family. As his position is not like the trustee or agent, he is not obliged to save or save as a trustee or agent provided he spends the family income for the benefit of the members of the family. The family, p., sraddha and other religious ceremonies of coparceners and their respective families.

The Karta has the power to run the joint family business. In this respect, it can take all the right and necessary measures for the promotion of the company.

The Karta may contract debts for family and family purposes which will bind the other co-contractors only to the extent of their interest in the common family property. Such debt contracts could personally bind the adult co-partitioners also if they were parties to the contract expressly or implicitly or they subsequently ratify the contract and in the case of minors if they ratify by obtaining a majority. In the case of an advanced loan to the manager, if the lender properly investigates the need for the loan and lends the money, the debt binds the interests of all the members, although the reasonably justified need did not exist.

The Karta has the power to enter into contracts, issue receipts, enter into compromises, and pay contracts that are ordinarily incidental to family affairs.

The Karta may refer to arbitration any case involving the interests of the common Hindu family and other family members, including minors are bound by the reference and, therefore, by the award made on it.

Karta may enter into a compromise on any issue relating to joint homesteads. However, he does not have the power to surrender a debt due to the common family and to abandon an object of value without any return or consideration, although he has the right to settle the accounts with the debtors and to reduce reasonably either interest or principal in the interest of the family.

The Karta has the power to give a valid discharge to the debt due to the common family. When one of the members of the common family is a minor, he can not claim the benefit of section 7 of the Limitation Act.

The Karta has the power to recognize a debt or make a partial payment, in order to extend the limitation period. But he cannot execute a new promissory note or bond in order to revive a time debt.

The Karta can represent the common family in the case of a complaint by or against the family so that the other members are not the necessary parties to the same thing. The Karta itself issued or it can bring an action with respect to any property or other issues of the common family. Whenever a decree is issued against him, it binds all the other members of the family, if, as far as the minor members are concerned, he has acted in the dispute in their interest, and in the case of important members he acted with their consent

The Karta also represents the interests of the common family property. In the case of Fathiunnisa Begum v. Tamirasa Raja Gopala Charyulu, the Court noted that a Hindu widow inheriting from her husband under the Indian Women’s Rights Act of 1937 does not per se disturb the common family status.

The Karta may alienate to the value of the common family property in order to bind the interests of the other coparceners provided that it is done.

1. a) With the consent of all existing co-partitioners; they are all adults;

(b) For legal reasons; or (c) For the benefit of the estate

At last we can say that the karta is the need of the family in todays life but as we moves towards the modern society rules ; this concept of karta is in the process of declining. Now, In the urban areas the importance of karta only lies with that person who is economically rich and having dip pocket. Even a young child became a karta of his family if he has access of money and having controls on family affairs. So, we cannot say that the concept of karta still lies everywhere in the society or in every family.

One thing I want to mention here is that the concept of karta or mukhiya is still lies in the village family but it lacks somewhere in the  urban side.